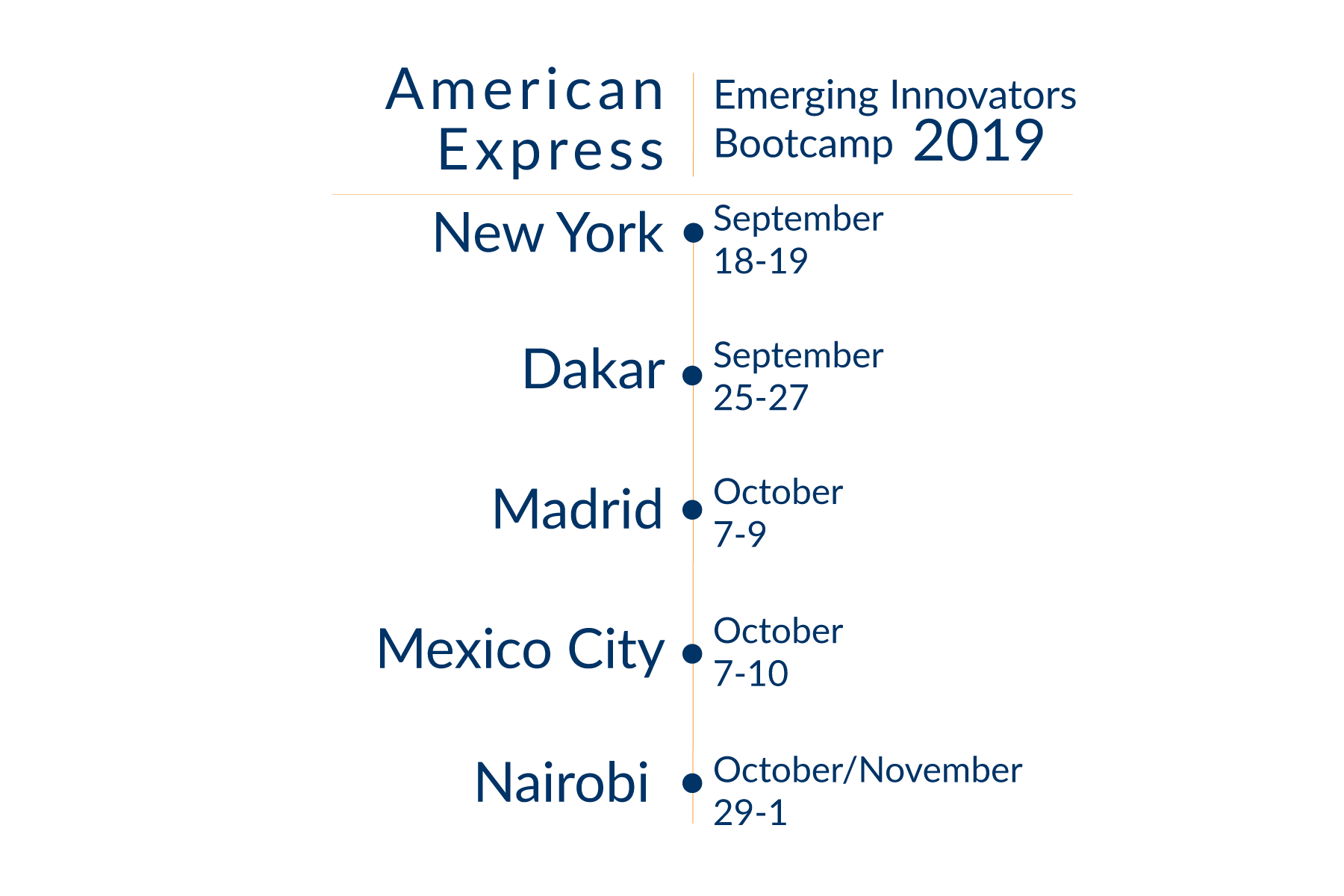 The American Express Leadership Academy Emerging Innovators Bootcamps are 2-3 day intensive trainings for social entrepreneurs and changemakers who can benefit from expert guidance, peer support and a safe space to reflect on inner growth and wellbeing.

How can you use dance to inspire girls to be scientists and mathematicians? Or train refugees as foreign language tutors to increase livelihoods and positive cultural exchange? Or revolutionize the way veterans re-enter the workforce? To bring big ideas like these to life, Ashoka and American Express created the American Express Leadership Academy Emerging Innovators Bootcamps.

The Bootcamps, which happen in New York City, Madrid, Mexico City, Nairobi and Dakar over two to three day periods, are intensive trainings for 125 rising social innovators to discuss and... MORE

Stéphane is Director of Operations & Product Development for Ashoka's Global Partnerships Team, where he combines his passions for social innovation, systemic solutions and team-building. Stéphane is a 2009 Echoing Green Fellow and founder of Fosfo, a movement to illuminate business behavior and empower ethical consumers. Stéphane also helped launch and managed operations for Oxfam America’s R4 Rural Resilience Initiative, a multi-sector collaboration that delivers drought insurance and other risk management services to farmers in Ethiopia and Senegal. He holds a 2007 Master in Public Policy from the Harvard Kennedy School, where he co-led the student Corporate Responsibility Council and joined the Social Enterprise Collaboratory. Stéphane’s other passions include his partner Justine, their sons Milo & Rory, and breakfast – not necessarily in that order.

Sara believes in the power of individuals to change the world, and she has been working in doing so for the past couple of years. From her small town in Northern Spain, to places such a India, Morocco, the Dominican Republic, Haiti, Malaysia, Sweden, and now Mexico, Sara has been involved in different youth, gender equality and entrepreneurship  projects, both in the private and non-profit sectors. She holds  a Masters in  Leadership for Sustainability from Malmö University and a degree in International Relations from Complutense University in Madrid. She has been the founder and curator of TEDxFolketspark, an European Union Structure Dialogue Ambassador and currently, she is the Fellowship Manager for Ashoka in Mexico, CA and the Caribbean.

Vincent is the founder of Informed Mashinani, a Youth Serving social enterprise working with young people to solidify their role in areas of leadership, policy influencing and socioeconomic development. Some of the sectors he has worked in include education where he developed a leadership and life skills program for beneficiaries of a scholarship program he was managing and in social service where he led the development of a model exit plan for children in charitable children institutions amongst other initiatives. Vincent joined Ashoka in 2014 and currently leads our Youth Years work in East Africa.

Her professional training in administrative management and her entrepreneurial qualities enable her to be multidisciplinary and involve in any programs. Before joining Ashoka, Binta worked in the private sector for SENELEC Senegalese National Electricity company, and for a Real State Enterprise. In 2004, she decided to take a sabbatical year and give a new direction to her professional career. The same year she received an offer to join Ashoka Sahel and replace a friend going to maternity leave... This is where has started the journey with the social entrepreneurship field.

Binta obtained her entire social sector experience through and with Ashoka over +14 years. She has gone through all the Ashoka steps and programs in the Sahel office: in 2004 as an intern, in 2005 acting Regional Representative, in 2006 Program Assistant, in 2007 Administration & Finance manager, 2013 Venture Fellowship Manager, 2016 Co-creation program coordinator, 2017, Ashoka Sahel Representative and Africa Ecosystem Research Director.

Douglas Ely is Associate Director of Wellbeing & Bootcamp Product Lead for Ashoka, the world’s largest network of social entrepreneurs.   He is interested in leveraging the strength of multiple sectors to better serve and empower communities.  Doug taught middle school math and science in St. Louis Public Schools with Teach For America, managed a campaign for Pennsylvania state legislature, and helped launch a national program to ensure all students attend schools that match their ability.   Doug loves to travel, save the environment, eat vegetables, play basketball, run for miles, cook, and tell good stories.

Brought to you by